Ethan rubbed the bridge of his nose. He should have known that Squeaky’s trouble would give him a headache when Scott wouldn't tell him what it was about in the beginning.

“But it’s not really what you’re thinking,” Scott rushed out. “See there’s this drug out there called the Powder.”

“The Powder? I haven’t heard of it,” Ethan said, frowning as he searched his memory.

“It’s either really new or really old. No one seems to know exactly. But it just started showing up in Winter Haven earlier this year,” Scott explained, seeming almost eager now to tell Ethan everything.

That’s so typical Scott: hold it back until he’s about to explode then confess everything all at once, Ethan thought with a sigh.

“No. That’s just it. No one knows who is selling it, but it’s popping up all over the place,” Scott said.

“Okay, that is weird,” Ethan said.

“So do a lot of drugs. Including the ones you use.” Ethan raised an eyebrow meaningfully at Scott. The other boy’s drug use was a point of contention between them.

Scott shook his head. “Not like this. As far as I can tell, everyone who’s taken it has died.”

“Why do I have a terrible feeling that those odds haven’t turned people off to it?” Ethan asked, his headache intensifying.

“A lot of people want to die, I guess,” Ethan said, trying to keep the bitterness out of his voice. And I want to live, but I may not have that chance.

“They say that the Powder’s supposed to show you things. Amazing things,” Scott said, his eyes searching Ethan's face as if wanting him to understand why people would risk their lives over this stuff.

“Hallucinations?” Ethan asked, wrapping his arms around himself. He’d been experiencing a few hallucinations himself on the new medication he took to fight his illness. What he saw haunted him afterward. But what he felt like on the drug -- other, alien and strange -- haunted him even more. I can’t even tell Scott about it, because it’s so damned disturbing.

“Not hallucinations. Not really,” Scott answered.

“What do you mean? If they aren’t really hallucinations then what are they?” Ethan asked, a prickling sense of unease running through him.

Scott gave out an uncomfortable laugh and looked away as he said, “It shows you the truth. What’s really out there. What we don’t see, but is there nonetheless. The Powder let’s you experience it.”

“So you experience this – this truth or whatever and then you die? Is that what you’re saying?” Ethan asked, swallowing shallowly. It sounded absurd, but something in him curled up as if protecting him from something.

Scott nodded but then he caught sight of Ethan’s face and his expression softened. “Hey, E, are you okay? You look kind of strained or something. I don’t mean to worry you about this stuff. Maybe we should just get out of here.”

“No, I’m fine. Just -- just tell me exactly what this Powder has to do with Squeaky,” Ethan said, deflecting Scott’s concern. He did feel off, but he didn’t know if it was his sickness returning or just the whole strange evening. Or is it the fact that what he’s saying sounds awfully close to what I experience on the medicine?

“The Powder killed this girl named Wendy,” Scott explained. “Squeaky was sort of going out with her. He was totally messed up about it. So he -- he came to me. He needed some help tracking the sons of bitches down who had sold it to her so he could do something about it.”

“I didn’t want you to be worried. I mean I’m not really involved in this like Squeaky was. All I did was just casually ask around about getting a hold of some of the stuff,” Scott said, the words tumbling out as he saw Ethan’s rigid spine. “People know my rep. I’m always up for something new. So it didn’t look suspicious or anything.”

“Yet Squeaky’s missing now, right? And people know you’re his friend and that you were asking around about this drug he was on a crusade against? It wouldn’t take a genius to put two and two together.” Ethan clenched his jaw to stop the scream of frustration that wanted to come out.

He felt the brush of Scott’s fingers on the back of his head. They lightly ran down to the nape of his neck. It felt almost like a caress, but Ethan knew it was just Scott’s way of calming him. Because he knows that his touch sidetracks me. Stops me from getting angry. That’s why he does it. But not this time.

Ethan whirled around to face Scott. “Don’t even try to calm me down. I can’t believe you’d be so stupid to get involved in this!”

“E, E, it’s okay,” Scott said, holding up his hands as if to smooth Ethan’s anger away.

“It’s not okay. How could you be so naïve?” Ethan’s face flushed a dark red. “You know what drug dealers are like. Even I know what they’re like. Paranoid and vindictive. If they’re willing to sell something that kills everyone who takes it, do you honestly think they won’t kill a couple of kids who poke their noses where they don’t belong?”

“That’s not good enough! If they even think you’re in this with Squeaky, they’ll -- they’ll hurt you!” Ethan yelled, cutting Scott off. His fear for the other boy overwhelmed him and he simply couldn’t stop.

“Don’t even! Don’t even bring that bastard into this!” Ethan said, still on his roll. “It's really damned rich for Squeaky to fancy himself an avenging angel for a drug overdose. How many people do you think he’s hurt by selling blow and meth? How many lives has he ruined? How many people are dead because of him?”

Scott’s lips pressed tightly together into a tight white line and Ethan thought he saw a glimmer of -- tears? Yeah, right. Scott’s going to cry because I yell at him? If only!

“I hate that you use, Scott. But even I can’t believe that you’d get involved with something like this! It’s -- it’s beyond the pale. It’s dangerous. Something could happen to you and I just couldn’t -- nothing can happen to you, got it?” Ethan was shaking as he thought of Scott cold and dead or just permanently missing with no explanation like so many people in Winter Haven.

“Hey, hey, I’m okay. Nothing is going to happen to me. Don’t get yourself all worked up. It’s not good for you,” Scott said, hands reaching towards him but not quite touching him yet.

“Your being okay is what’s good for me! You think you’re immortal, but what’s happening to me should be a lesson to you! We’re all going to die, Scott, it’s just a matter of when!” Ethan wrapped his arms around himself as the trembling began to spread. He couldn’t tell if it was his emotions or another round of fevers starting. God, let me not be getting sick again. Please not now. “Don’t you understand?” Ethan bit out. “You could die, Scott!”

Scott’s finally hands closed on Ethan’s shoulders, gently petting him. “I’m not going to die. I’m not leaving you. I’d never do that.”

Scott pulled Ethan towards him until they were only a half-inch apart. The other boy was so close. Close enough to smell his cologne. Spicy and orange. Close enough to just sink against him and be carried by his strength. Close enough to kiss. Ethan became achingly hard in moments, even as anger and fear pulsed in his veins. He found himself leaning forward and breathing in every one of Scott’s exhales.

The thought of losing that beloved face, of not hearing Scott’s laugh or seeing the crazy glint in his eyes was unbearable. Maybe it was all of these things that pushed Ethan to just realize that half an inch separated him from feeling the forbidden lushness of Scott’s mouth against his own. Just a half inch …

With a wrenching gasp, Ethan pulled himself back. What the hell was he doing? He couldn’t risk his friendship with Scott over this! He couldn’t. Ethan tried to back up, but strangely Scott’s hands were still locked on his biceps.

“Let me go,” Ethan said, fear of being found out making his voice quiver.

Scott said nothing to that and Ethan wondered if Scott knew how much of a lie he had just told. The other boy’s blue eyes were hooded and in the dim light Ethan couldn’t read his expression. He watched as Scott suddenly licked his lips. Ethan made a soft moan. He knew that Scott was seeing and hearing all of this. Humiliation caused his cheeks to burn even as his arousal blazed brighter. Scott probably could probably feel the heat pouring off of him.

Scott’s voice was huskier than normal as he said, “E, please tell me that I’m not misreading--”

But he was cut off by the ringing of a phone. The sound startled both of them and they jumped apart like two guilty kids.

“It’s Squeaky’s cell,” Scott said, clearing his throat. He began to turn around in a circle trying to locate the phone.

Ethan swallowed hard. He knew he should be happy that they had been distracted, but for just a second, he had thought that Scott was going to say that he felt the same thing for Ethan that Ethan felt for him. Should be damned grateful that scene ended before I blurted out something I couldn’t take back. If Scott asks me about it later, I’ll think of some excuse.

“Where the hell is it?” Scott asked.

“It sounds like it’s coming from over there,” Ethan said, pointing towards the bed.

Then they both saw the muted indigo glow of Squeaky’s cell. It was in the center of the bed, under the comforter, just where the bedding underneath looked to be bulging up slightly. Both boys began to walk towards it. Finally, the caller hung up or got transferred to Squeaky’s voice mail, and the indigo light vanished.

“The phone must have gotten covered up and he couldn’t find it,” Scott guessed even as he grasped the edge of the comforter and yanked it off.

Everything seemed to slow down as the comforter slid off the bed and pooled on the ground. Ethan had thought that the small hump in the center of the bed was just sheets or clothes heaped up underneath the coverlet, but he was wrong.

Squeaky had dug out the center of his mattress and wedged himself inside in a fetal position. His face was turned upwards; his eyes were wide open and unblinking. His mouth, too, was agape in a silent scream. There were blood trails coming out of his tear ducks and nose. Ethan’s stomach roiled as he caught the unmistakable sweet scent of decay.

But it was the expression on Squeaky’s face that made Ethan’s heart freeze in his chest. Whatever Squeaky had last saw had transformed his face from its normally slightly dopey expression into something unrecognizable. It had to be what Squeaky last saw that had done this to him, because Squeaky wasn’t seeing anything now.

Ethan stumbled backwards, tripping over a pile of dirty laundry and landing hard on his backside. But he didn’t feel the bruising fall. His whole being was wrapped up in the corpse on the bed.

Scott was suddenly turning and kneeling down beside him. His hands gripped Ethan’s shoulders. Saying ‘oh my God’ and ‘fuck’ and ‘police’ and ‘are you okay’ and ‘please be okay’ and ‘hold on’ and ‘calling an ambulance’ and ‘don’t you fucking die on me, too.’

That was all Ethan remembered before he tumbled into unconsciousness. 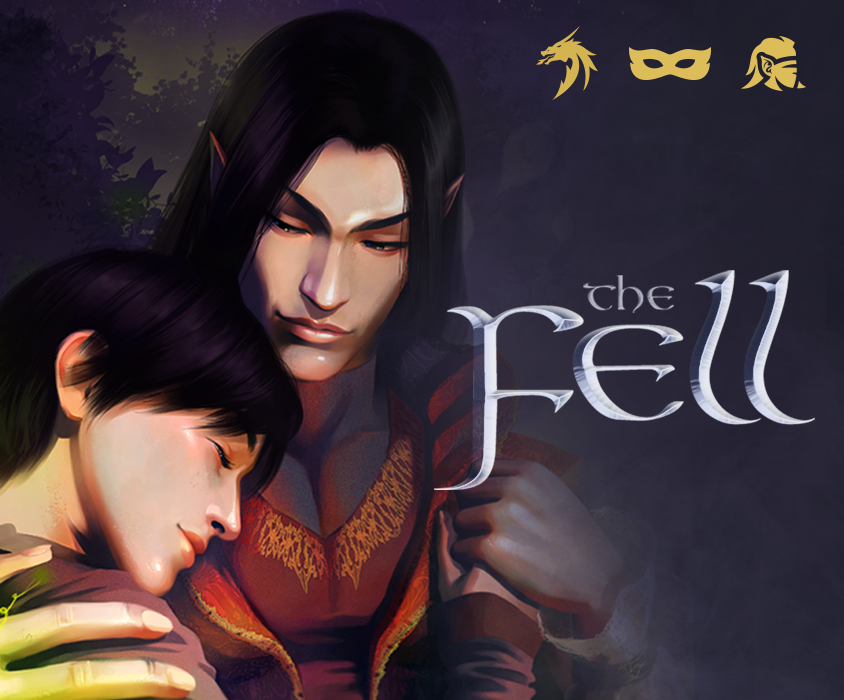